Indoor pollution is caused by the presence of physical, chemical and biological contaminants in the air within confined spaces.

The prolonged stay in such places (most people spend approximately 80% of the day in buildings or means of transport) poses a serious risk to human health, especially for the more vulnerable, such as children, the elderly and people suffering from chronic illnesses and allergies.

Check for the presence of asbestos

Active and passive sampling with specialised instruments for:

Research to discover the source of the pollution

Indoor pollution is related to confined environments, such as workplaces (non-industrial), housing, commercial, recreational and transportation facilities. This kind of pollution is referred to when contaminants (or the majority of them) are produced within the buildings themselves.

The main indoor air contaminants can be of a physical, chemical or biological nature. 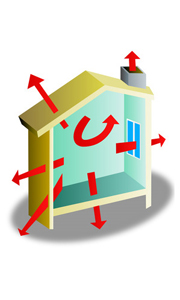